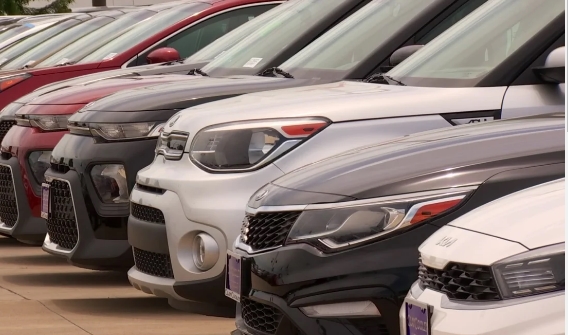 In California, people are buying fewer new cars and trucks from dealerships this year compared to last year.

According to a recent report from the California New Car Dealers Association (CNCDA), the new vehicle market fell 16.1% in the first nine months of 2022. That’s compared to the same time frame in 2021. The report said there are a few contributing factors, including less-than-predictable supply chain issues.

“I think what’s happening in our marketplace is there’s not enough vehicles to meet demand,” said Brian Maas, the CNCDA President, adding that concern about increasing interest rates, as well as the overall cost of new cars right now is not helping.

More than 1.2 million vehicles were sold since the start of 2022, but 2 million is considered a more normal target. When it comes to the top-selling passenger vehicles of the year, according to the CNCDA report, the Tesla Model Y is in the No. 1 spot with more than 61,500 registrations.

“It’s not surprising,” said Maas. “I think Tesla’s done very well appealing to California buyers interested in the brand as well as converting to electric vehicles.”

A dual motor all-wheel drive Tesla Model Y long range is listed on their website for $65,990. It is $4,000 less expensive than the other option for a Model Y which is the performance version. They make it clear on the page to mention, “all prices are shown without potential incentives or gas savings.”

“It’s not surprising that folks who want those vehicles are willing to pay more,” responded Maas.

While Maas is not shocked by the popularity of Tesla, he admits it exposes an area of improvement in the automotive industry.

“The challenge going forward is, can the industry respond by making more affordable vehicles for lower and middle class Californians who maybe can’t afford a 60, 70, $80,000 vehicle,” said Maas.

While Maas said there is no specific data from CNCDA that points to who is being pushed out of the current car market, he acknowledged that car dealerships up and down the state have seen a pattern.

“Unfortunately, at least in the current market we are skewing toward middle and higher income Californians for new cars,” said Maas.

Haiden Herrera is one of the many California residents who is delaying a new car purchase. He drives a pre-owned Honda, and said he still owes money on it.

“It’s just not really an option for me right now or for us, financially,” said Herrera.

And, then there are those increasing interest rates.

“It is certainly going up. You’re not seeing many ads for zero-percent financing for vehicles. Very, very few,” said Maas. “That’s reflective of the fact that overall interest rates are higher, so my guess is somewhere 5, 6, 7% probably is going to be typical for a high FICO score consumer.”

If you’re looking to upgrade your car right now, Maas suggested exploring certified pre-owned options that could save you anywhere from 20-40%. Although ideally, he said it would be smart to wait it out until 2023, if you are able to.

“Once supply chain issues take care of themselves, sales will turn around even with the price pressure and the interest rate concerns, and what have you,” said Maas.