From Chinese New Year Celebrations to Daily Life, Here’s the Significance of the Chinese Dragon 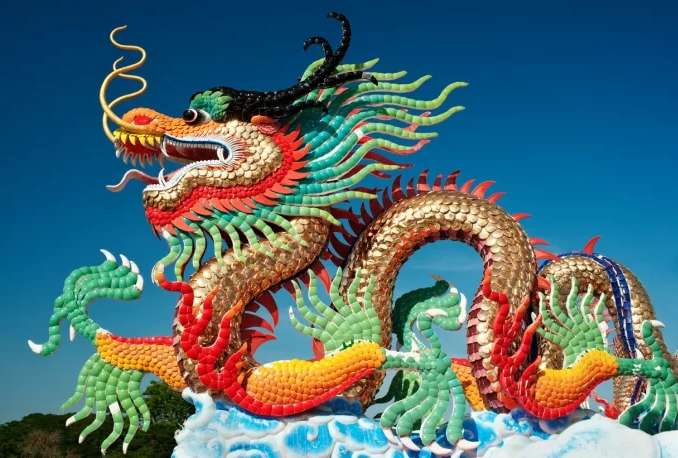 The Chinese dragon has been around in mythology and folklore for about as long as there’s been a Chinese civilization—which is centuries. Many cultures have tales about dragons. The word itself comes from the Ancient Greek word “draconta,” which means “to watch.” In Chinese, the word for dragon is “loong or long.” But what exactly is the Chinese dragon’s meaning?

Dragons are such a popular figure in China, and there are even a number of Chinese idioms that reference them, including: “A dragon’s pool and a tiger’s den,” meaning you’re entering a dangerous location.

How does the Chinese dragon differ from dragons in other cultures? What role do they play in seeking health and prosperity? Where can you find dragon-like figurines in Chinese daily life? Find answers to these questions and more below!

What Does the Chinese Dragon Symbolize?

The Chinese dragon is a positive image in Chinese culture, symbolizing such things as wisdom, authority, prosperity, health and protection.

Are Chinese Dragons and European Dragons the Same Creature?

The Chinese dragon differs from the European dragon figure. Some key differences:

What Are the Robes of the Dragon?

Dragon robes have their origin in the seventeenth century, but the use of dragons on the noble dress is known from the days of the Tang Dynasty (618-960). A dragon robe was worn by emperors and among the upper classes. They are traditional-style robes with dragon decorations. They’re worn during festivals and are quite elaborate in both color and embroidery work. A yellow dragon robe was worn only by the emperor, and mostly for festivals and other celebrations.

What Are the Nine Different Chinese Dragons?

The Chinese culture recognizes not one but nine dragons. Here they are in no particular order:

Bixi Dragon – Often illustrated wearing a turtle shell, and appeared in stories as early as the third century.

Qiuniu Dragon – A yellow dragon with a snake-like body, and is known as the eldest.

Chaofeng Dragon – A horned dragon, known for being “curious and adventurous.” This dragon is often carved into roofs.

Pulao Dragon – Lives in the ocean. Pulao’s roar is so mighty, it can shake heaven and earth. This dragon is often engraved on bells, and there’s a bronze culture of this dragon on the Big Bell Temple in Beijing.

Chiwen Dragon – This dragon sits on rooftops, and is thought to block evil influences.

Bi’an Dragon – Bi’an watches over doorways and prisons, as he is known for his wisdom and settling disputes.

Suanni Dragon – While Suanni doesn’t breathe fire, the dragon does love it. You’ll find this dragon engraved on the base of Buddhist thrones and incense holders.

Ba Via Dragon – Part tortoise, part dragon, known for transporting things across land. This dragon is often found engraved on bridges, graves and a number of statues.

Chinese dragons actually come in a variety of sizes, colors and styles, often even combining the looks of more than one animal. They do have a few things in common—usually long bodies resembling snakes, and sharp claws. Some dragons are made to look more like fish or turtles. The Chinese even have a saying that “the earliest dragon is the lightning in the sky when it rains.”

What Do the Different Colors of Chinese Dragons Mean?

There are six colors of Chinese dragons. They are listed below, along with their assigned meaning:

White – Purity and cycle of life

What Does “Rising Dragon” Artwork Mean?

“Rising dragon” is a popular tattoo design. It points to the dragon’s overall positive symbolism in many cultures. In general, it symbolizes power, wisdom and good luck. Dragon tattoos continue to grow in popularity.

How Are Chinese Dragons Related to the Zodiac?

Related: 6 Easy Chinese New Year Traditions You Can Follow for the Year of the Rabbit

Where Should Dragon Figurines Be Placed In Your Home?

Chinese people will often include some kind of dragon decor in their homes, as they are supposed to bring good luck and safety. There are a few guidelines to keep in mind; when placing a dragon in an office area, make sure it’s placed at your back, don’t let your dragon face a wall, and place it in an open space.

Celebrations for Chinese New Year, a 16-day affair that begins on January 22 in 2023, often begin with a dragon dance. In the past, it was a way of asking the dragon gods to give citizens a prosperous new year, but now it’s more for entertainment purposes. During this dance, trained performers move in unison under a large, paper-mache dragon figure that’s anywhere from 33-66 feet in length.

Another Chinese holiday that incorporates the dragon is the Dragon Boat Festival, or Duanwu Festival, which takes place in late spring or early summer. It takes place on June 22 in 2023. Festivities may include a dragon boat race, with boats long enough to hold up to 20 paddlers. Special food, such as zongzi (rice dumplings), is served at celebrations, and people make perfume sachets to wear around their necks, which is thought to keep away evil spirits and insects.