Opponents gathered more than enough signatures to place a referendum on the ballot. 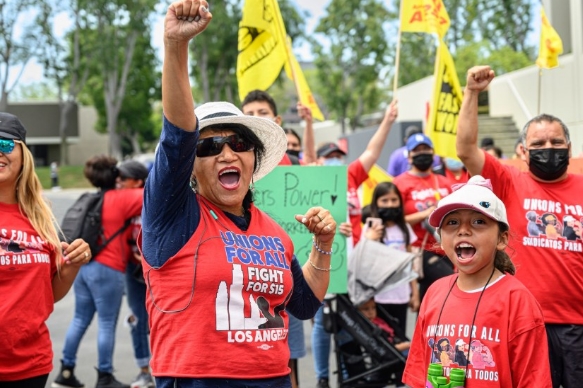 A bill that would boost wages and improve working conditions for California’s fast-food workers has been put on hold until the November 2024 election when voters will decide its outcome. Fast-food workers from around the state gathered outside the office of state Sen. Dave Mins, D-Irvine last year seeking support for AB 257. (File photo by Mindy Schauer, Orange County Register/SCNG)

A bill that would boost wages and promises to improve working conditions for California’s fast-food workers has been put on hold until the November 2024 election when voters will decide its outcome.

Assembly Bill 257, also known as the FAST Recovery Act, was signed into law Sept. 5 by Gov. Gavin Newsom. But Save Local Restaurants — a coalition of fast-food franchisees and franchisors who oppose the measure — gathered enough signatures to place a referendum on the 2024 ballot.

The coalition, which needed 623,000 voter signatures by Dec. 4 to put the bill on hold, submitted more than 1 million. At least 712,000 were deemed valid Tuesday, Jan. 24 by the Secretary of State’s office.

AB 257 would create a 10-person, state-run council to negotiate wages, hours and working conditions for the more than half a million fast-food workers in California. It would establish a minimum wage of up to $22 an hour in 2023, with capped annual increases thereafter at restaurants with more than 100 locations nationwide.

The bill is designed to help workers who often struggle to make ends meet. It would also address wage theft, harassment, discrimination and unsafe work conditions fast-food workers say they face on the job

An Oct. 15 report from the UC Berkeley Labor Center shows that people working fast-food jobs are more likely to live in or near poverty. One in five families with a member holding a fast-food job has an income below the poverty line, the study said.

But another report from the UC Riverside School of Business suggests AB 257 could boost fast-food prices by as much as 30% and shift consumption to other parts of the food-delivery network, including full-service restaurants and grocery stores.

“The FAST Act was a solution in search of a problem that didn’t exist,” International Franchise Association President Matt Haller said Wednesday in a statement. “Fortunately, now more than one million Californians have spoken out to prevent this misguided policy from driving food prices higher and destroying local businesses and the jobs they create.”

The California Department of Finance also opposes the bill, saying it “could lead to a fragmented regulatory and legal environment for employers and raise long-term costs across industries.”

How Much Is a Speeding Ticket in California?

New California laws going in to effect in 2023