Best Places To Live In California In 2023 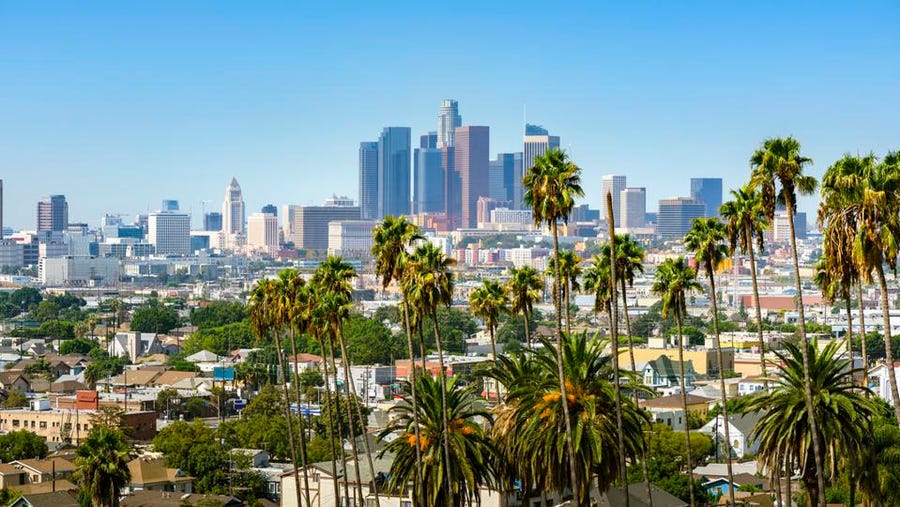 Many people love living in California for its laid-back culture and diverse climate featuring beaches, desert and mountains. Whether you want to live on the coast or inland, the Golden State offers something for everybody.

If you’re wondering where the best places to live in California are, our guide can help you find your ideal community. We analyzed cities by pulling recent data on key lifestyle factors such as the area’s median home price, personal income per capita, and the unemployment and crime rate.

Consider Bakersfield if you want to live in one of California’s most affordable cities that’s also close to Los Angeles.

This mid-sized town may lack the electric nightlife and amenities of bigger cities, but you can be in LA within two hours or reach San Francisco in approximately four hours. You can also drive a few hours to be in Kings Canyon or Yosemite National Park. Edwards Air Force Base is nearby, too.

The town has a diverse set of industries including agriculture, healthcare and oil. Unfortunately, the pollution stemming from these industries is a common complaint from locals and may surprise those moving to California.

Fresno is California’s largest inland city and 45 miles from the state’s geographic center. The region is famous for fresh fruits and nuts, but healthcare also employs many residents.

However, its crime and unemployment rates are higher than cities with a larger tech job base. The area also has seasonal air quality problems and hot summer temperatures as it’s in the San Joaquin Valley.

The city mayor’s office is currently revitalizing the downtown area. Young adults should consider living near the Tower District to enjoy dining, entertainment and shopping all within walking distance.

Nestled in central California, Modesto is less than two hours from San Francisco and Sacramento when you need to visit a major city. It’s one of the state’s more affordable cities with a relatively low crime rate.

Located an hour up the coast from Los Angeles, you can enjoy coastal living at a relaxed pace in Oxnard. This city is significantly smaller than LA or San Diego, while still diverse and providing access to the beach and excellent restaurants.

Interestingly, Oxnard is also home to many celebrities and the world-famous California Strawberry Festival.

Finding a home in the Vallejo-Fairfield metro area lets you live on the outskirts of the San Francisco Bay area and easily access the Sonoma and Napa wine countries.

The driving employment sectors for the area include aerospace, healthcare and manufacturing. Vallejo also has a revitalized downtown district with several art studios and opportunities to enjoy the water in San Pablo Bay.

San Jose describes itself as the “Capital of Silicon Valley” as it counts many tech companies as pivotal employers. These lucrative jobs help absorb the living expenses which are high even by California standards. You may also need a jumbo mortgage to buy a home due to its high home prices, so take that into consideration.

This city is one of the best places to live in California for families as there is a low crime rate, plenty of outdoor activities and a diverse Asian and Latin cultural presence. You’re also an hour from San Francisco when you want to visit the coast.

As the second-largest city in the U.S., Los Angeles provides many employment and leisure possibilities that go beyond Disneyland, Hollywood and professional sports.

The metropolis offers a warm desert climate with very mild winters that SoCal is famous for, yet you can also reach the beach with ease. However, traffic jams are a significant problem and it’s not always easy to bike or walk to work. The crime rate is also relatively high versus other California cities.

If you’re moving to the City of Angels, finding the best inland suburb for your budget can require some effort. You may also enjoy beach communities like Long Beach or Santa Monica which are minutes from downtown but offer some respite as the Pacific Ocean is easy to reach.

Related: How To Choose A Car Accident Lawyer In Los Angeles

San Francisco is the economic hub of northern California. There’s a lot to like about the city with its coastal location and hilly yet scenic landscape. Additionally, the city has mild weather all year although it can get chilly during the winter.

While the city isn’t technically in Silicon Valley, it’s home to many tech startups and financial companies. Along with a thriving employment sector, the Golden Gate City has many cultural areas of interest including Chinatown, Fisherman’s Wharf, Little Italy and Union Square.

Unfortunately, San Francisco is one of the most expensive cities to live in and it might be better for young adults with more disposable income.

San Diego is one of the best places in California for young adults as the metro area has ample beach access and a vibrant social scene with a smaller population than Los Angeles. Thanks to having more exposure to the ocean, it also tends to have milder summers than LA. Its sunny climate also makes San Diego solar-friendly.

San Diego is home to the U.S. Navy’s Pacific Fleet, which is a substantial employer along with the biotechnology, healthcare and tourism sectors.

There’s an abundance of things to see and places to eat that highlight the city’s many cultural backgrounds. Some of the best beach spots include Coronado Beach, La Jolla Shores and South Mission Beach. Balboa Park, Legoland and the San Diego Zoo are also popular land attractions.

California’s capital city is family-friendly, has ample educational opportunities and offers a reasonable cost of living. Its unemployment rate is among the lowest in the state as government, healthcare and technology are core industries.

Sacramento is also an excellent gateway to the splendors of temperate northern California, while also being two hours from San Francisco. For local leisure activities, there are several professional sports teams, a 32-mile bike trail, breweries and coffee shops.

The metro areas we chose are spread across the state and can be excellent places to call home for young professionals, families and retirees. There are many economic opportunities spread across coastal, desert and mountain climates.

The comparison criteria and corresponding sources include: