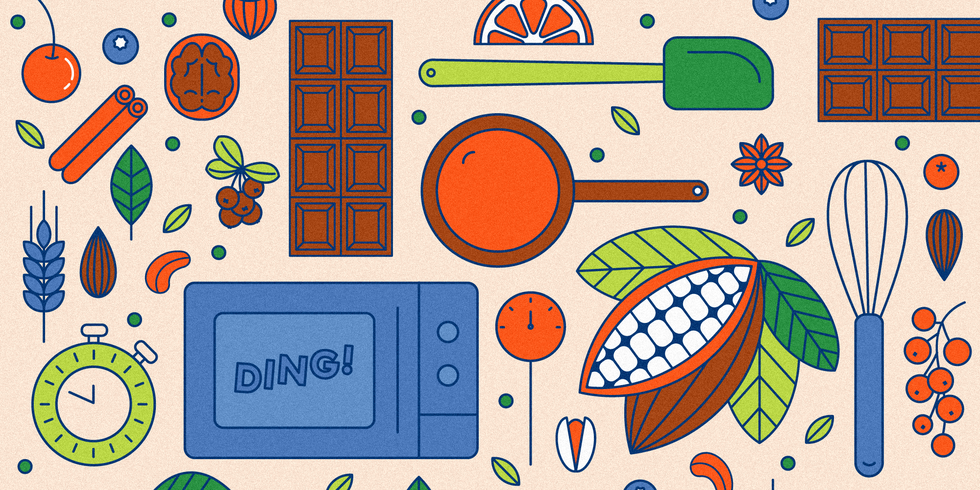 This interview is part of “Netflix Cooking School,” Delish’s new partnership with Netflix where we bring readers exclusive content tied to the premieres of some of their most popular new (and returning!) food shows.

Gonzo Jimenez is Bake Squad‘s resident chocolatier. This season will see the man—who started as a pastry chef and worked his way into mastering chocolate, something he says many pastry chefs are scared to do—creating dragons out of chocolate, spheres of cacao bigger than a boulder, and, of course, so much more. It only made sense that I, a vaguely talented home baker, turn to him with all my chocolate-related questions (brave, I know!). And wouldn’t you know it? He had fantastic answers to all of my problems, and I now know how to temper chocolate…and how to not ruin those halves of black & white cookies. Here’s what you need to keep in mind next time you attempt to work with chocolate at home.

You’re working with something dynamic.

Or, in Gonzo‘s words, with something “that is basically alive.” Chocolate has crystals, he explains, and those crystals have many different forms. Once chocolate blooms, you can over- and under-crystalize it, so the first thing is you need to understand is how to temper the stuff properly.

Double boilers are not worth your time (…at home, that is).

Unequivocally, if you’re tempering chocolate at home, it should “always be in a microwave.” The best way to melt chocolate is in a microwave in a plastic bowl. You should melt it in 30-second segments, stirring the chocolate with a rubber spatula at each interval, ideally at 45-50 degrees Celsius (~115-120 Fahrenheit).

Seriously—forget the double boiler. It’s not going to improve your DIY chocolate game.

He explains it better than I ever could:

At the end of the day, with a double boiler, you’re going to create some steam in your kitchen and some steam around your chocolate. Steam and chocolate are not good friends. It could lead to blooming down the road and it could change the texture. Stay away from water and steam as much as possible.

You can do it. But it is going to take practice.

“It’s the same as anything that we do in life,” Gonzo notes: “Making bread is actually pretty hard, too, but COVID hit and everybody was going through sourdough at home. There’s no way they were all good at it! Why not just practice with chocolate instead?”

No, you shouldn’t be adding any cream.

There are, of course, a few differences between the types of chocolate you’re most likely working with at home (dark, milk, and white), but the primary ones are (1) their tempering curve, AKA the heating, cooling, moving, and re-heating of chocolate, and (2) the amount of existing milk powder.

“Forget about that typical commercial that you see where the European grandma is adding cream to the chocolate. That’s all bullshit!” Gonzo would like to remind you that “chocolate in the real world is made with actual milk powder, so if you’re adding milk, you’re adding water.” Those paying close attention will remember water “is the enemy of chocolate.”

In fact, Gonzo prefers to call the process “pre-crystalizing,” especially when he’s teaching classes: “There are many other factors here such as time and movement. What we’re doing when we are pre-crystalizing the chocolate is we are realigning the crystals that are in the cocoa butter.” He stresses how important moving chocolate is while adjusting its temperature (“chocolate needs to be moved”) if you want anything close to perfection.

Once you’ve learned how to pre-crystalize, it’s a skill you’ll have for life.

Not only does Gonzo say he has a KitchenAid at home “collecting dust,” but he also says he doesn’t work with sweets at all when he’s not at work. And even if you don’t? “We’re talking about chocolate and sugar. It’s gonna taste good no matter what.”

How I Lost 60 Pounds While Running A Chocolate Empire

The 5 Best Things to Order at a Hilton Garden Inn